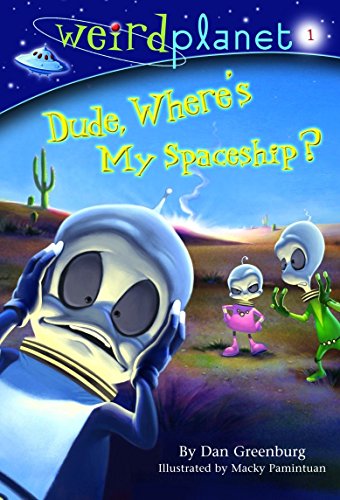 Greenburg's (the Secrets of Dripping Fang series) silly story about a trio of aliens who crash their spaceship into earth launches the Weird Planet series, but never quite lifts off. After Ploo and her older brothers land in the Nevada desert, they use a "hide-a-craft" device to make their spacecraft disappear just as two men drive up and cart Ploo away to a nearby army base. Her siblings then morph into humans and chew gumballs that enable them to speak English. Stealing a pizza delivery car, they manage to talk their way onto the base, but when they arrive at the building where Ploo is allegedly being held, they find it empty. Lily, daughter of Major Paine, who's in charge of the base, sets her free, and the two become fast friends ("They giggled till they ached. They giggled till they could hardly breathe"). The tale ends with the reunited siblings driving off in a stolen car, headed to Las Vegas in search of the woman who can reportedly fix their damaged spacecraft, the setting for their next adventure, (ISBN 0-375-93345-X), also due the same month. As the aliens try to make sense of English words and human objects, the plot will elicit occasional chuckles, but it lacks the spark and humor to propel most readers to move on to the aliens' next escapade. Ages 7-10.