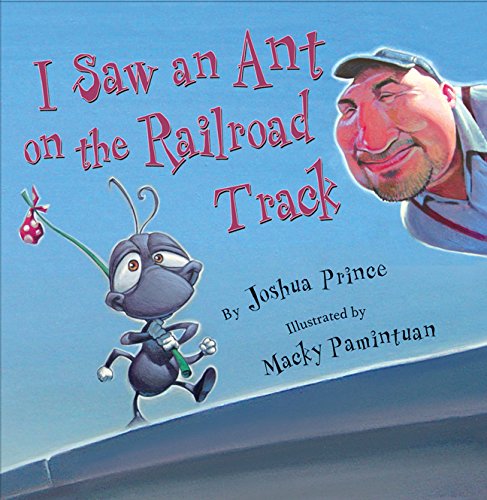 I Saw an Ant on a Railroad Track

Can a brawny railroad switchman named Jack do his job in time to save an oblivious ant that's traveling "eastbound... on a westbound track" from getting smacked by a freight train? Even very young readers will initially wonder why conscientious Jack doesn't simply pick up the ant and move him to safety, but Prince's debut book offers enough diversions that most youngsters should be willing to suspend disbelief and embrace the tall-tale spirit of the story. The comic drama escalates as Jack discovers, "The switch was stuck!/ Oh, ruin to wrack!/ Those cold steel wheels/ would soon attack/ that wrong-way ant on the way-wrong track/ just out a-searching for a snack!" But the ant's stomach turns out to be its salvation: spotting Jack's sandwich, it leaps from the track just in time to avoid the train—and enjoy a genial picnic with Jack. Pamintuan's slick pictures emit an almost palpable muscularity and tongue-in-cheek sense of sweeping horizon; the illustrator seems to be simultaneously channeling a bit of the spirit of Grant Wood and . Prince sets himself quite a challenge by making the "ack" sound predominate in the rhymes, but the sound fits both the premise and heart of the story. The percussive, theatrical text and larger-than-life pictures result in a made-to-order read-aloud. Ages 2-5.