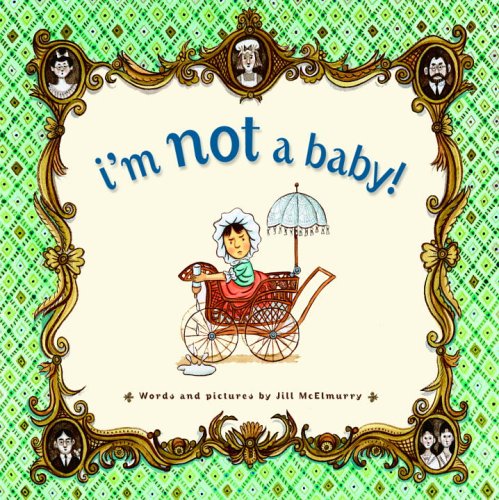 With witty, Victorian illustrations and droll dialogue, McElmurry ( ) tells the fairy tale story of a boy whose family will simply not believe that he has grown up until he has an infant of his own. Initially, the repeated formula of Leo shouting "I'm not a baby!" seems funny, but as Leo grows up, the story's gradual resolution takes on an odd tone. Leo appears in a Shakespeare play sporting footies and holding a rattle, and the family dresses the mustached Leo in his baby bonnet for his first day at the office. The family often reacts to Leo's utterances with three lines of comical dialogue. When Leo gets lumpy oatmeal while the rest of the family eats luscious waffles, for instance, baby Leo says, "Poopie!" " 'The baby said poopie,' said Lester. 'The baby is persnickety,' said Papa. 'Perhaps the baby needs a fresh diaper,' said Nanny Fanni." The illustrations exude eccentric charm. The nanny's red high-tops peek out from underneath her proper Victorian maid's uniform, and Leo's brother appears with a pet white mouse on his shoulder. Most children will initially relate to Leo's frustration at not being seen for who he is, and laugh at the incongruity of a grown man being taken for a baby. However, the holes in the fantasy logic (Leo is the only member of the family who is not allowed to grow up) may wear thin at subsequent readings. Ages 4-8.