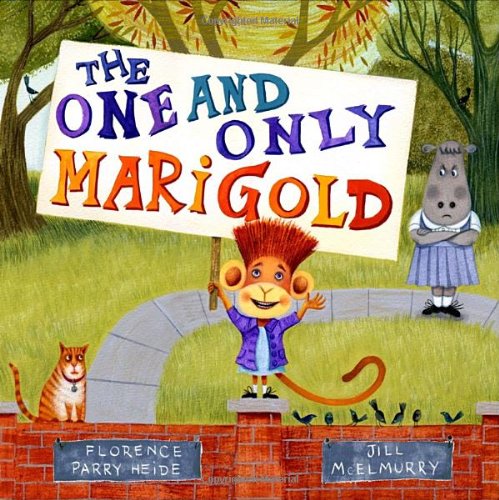 The One and Only Marigold

In four vignettes, Marigold, a strong-willed young monkey, talks back to her mother, torments her closest friend and cheerfully gets away with everything as she asserts her individual style. The first story follows her on a shopping expedition to replace her old, patched purple coat: Marigold rejects frilly and silly offerings and goes for an exact but too small duplicate of the first coat, eccentrically accessorized; her fashion sense is rewarded when everyone admires her. In subsequent tales, Marigold concocts elaborate illustrated lists, one of which names the old coat as her best friend and rates her actual friend, a hippo named Maxine, a close second. As depicted in McElmurry's ( ) stylish spreads, a blend of up-to-the-minute humor and nostalgic, folklike patterning, Marigold has a long prehensile tail and spiky rust-colored hair that she sometimes wears in topknots. Heide (the Treehorn books) introduces a stubborn, potentially maddening character, but Marigold's sunny disposition and creativity make up for her mischief; she will ring true for friends and parents of inventive children. Ages 4–8.