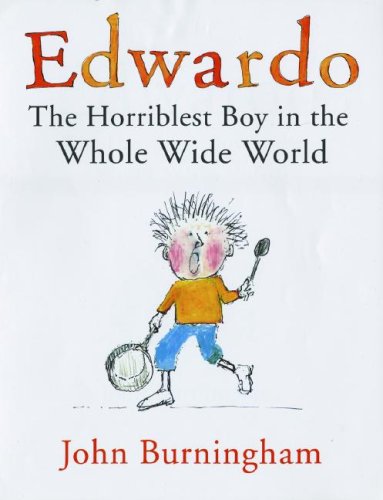 Edwardo: The Horriblest Boy in the Whole Wide World

Burningham's ( ) delightfully inverted cautionary tale introduces an "ordinary boy" whose less than exemplary behavior elicits a host of hyperbolic responses that only exacerbate the problem. When Edwardo makes noise, he is called "the noisiest boy in the whole wide world," after which the lad "became noisier and noisier"; when he chases the cat, he is accused of being "the cruelest boy in the whole wide world" and then becomes "more and more cruel." The admonitions culminate in the moniker revealed in the book's subtitle—but then a series of inadvertent good deeds comically turns the tide of opinion. After Edwardo maliciously tosses a bucket of water over a dog, its owner thanks him for washing his muddy pooch and the boy begins to take care of other people's pets. The clutter that the untidy child tosses out of his bedroom window happens to land in a donations truck and Edwardo is praised for his generosity. Readers may not be surprised but will surely be satisfied when the seemingly reformed Edwardo is finally heralded as "the nicest boy in the whole wide world." Burningham's spare, whimsical watercolors amplify the wry humor of this look at the effects of actions and reactions—misguided or not. Ages 4-8.