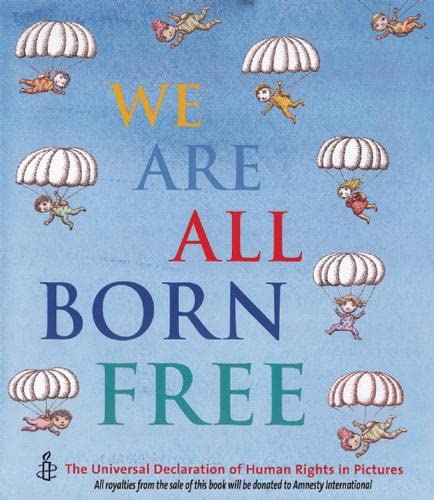 We Are All Born Free: The Universal Declaration of Human Rights in Pictures

In time to mark the 60th anniversary of the Universal Declaration of Human Rights in December, this attractive volume taps roughly 30 illustrators for visual interpretations of that document; the text is a simplified, child-friendly version from Amnesty International. Luminaries include Peter Sís, whose art is on the cover; John Burningham, who envisions Articles 1 and 2 (“We are all born free and equal.... These rights belong to everybody, whatever our differences”) as a multiracial crew of smiling children bouncing on a trampoline, balloons floating into the distance; Jane Ray, who responds to Article 5, against torture, with a painting of a seemingly scarred rag doll, well patched but burned and spattered in red paint; and Chris Riddell, who injects a rare note of humor via a dragon that accidentally destroys the “proper order” called for in Article 28. The structure is cumbersome, as readers have to flip to back matter to learn who illustrated what, and the art tends to be literal-minded (children dancing around a statue of Nelson Mandela). Even so, the concepts emerge clearly, and adults searching for a way to introduce children to the complicated subject of human rights need look no further. Ages 6–up.