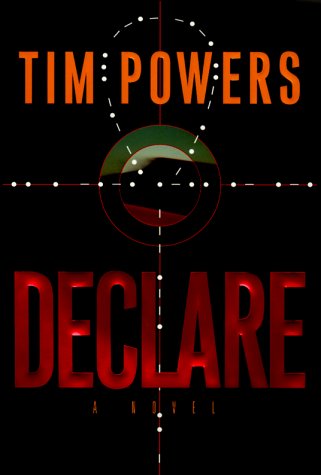 Powers (The Anubis Gates, etc.), known hitherto as an expert fantasy writer, has created a mind-bending mix of genres here, placing his gifts for extreme speculative fiction in service of a fantastical spy story involving rivalries between no fewer than four intelligence services: British, French, Russian and American. In 1963, Andrew Hale is summoned to reenter the secret service. He has a past embracing anti-Nazi activities in Occupied Paris--where he fell in love with Elena, a Spanish-born Communist operative--and a spectacularly unsuccessful mission on Mount Ararat in 1948, the purpose of which only gradually becomes clear. Powers posits that the mountain, as the speculative last home of Noah's Ark, is also the dwelling place of many djinns, supernatural beings that often take the form of rocks in the Arabian deserts. The father of British spy Kim Philby, a noted Arabist, had been a keen observer of these phenomena and taught his son about them. Now it seems that a supernatural power, manifesting itself as an old woman, is safeguarding the Soviet Union, and if fragments of a destroyed djinn can be introduced into Moscow, they could destroy her protection and make the Soviet Union susceptible to normal human laws. This is Hale's mission. In 1948 it failed, and most of his commando force was destroyed. On his return 15 years later, with Philby, Hale succeeds in shooting fragments of djinn into Philby, who then returns to Moscow. Upon Philby's death many years later, the Soviet Union duly collapses. The styles of spy fiction, with dense counterplotting and extremes of caution, and the spectacular supernatural scenes simply do not blend. It's all offbeat and daringly imaginative, but ultimately rather foolish entertainment. (Jan. 9) Forecast: This original novel, despite its strengths, is unlikely to satisfy fully fans of either spycraft or fantasy--and such is the pitfall of genre-bending. A 6-city author tour plus vigorous promotion online and off could give the book some turbo power, though.
close
Details