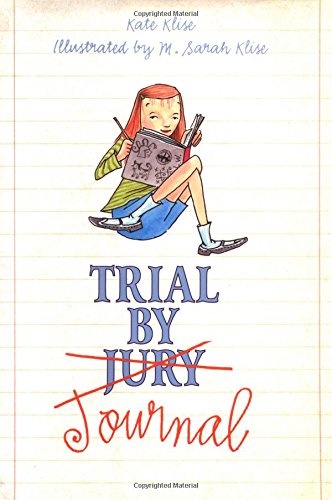 The sisters Klise once again use the format they mastered in to cleverly recount Lily Watson's experience as the "first juvenile juror in the state's history." The sixth grader here records her experience as a sequestered juror for a research paper assignment, in order to avoid attending summer school. With little knowledge of protocol ("I have NO idea how to do footnotes or a bibliography, so you can forget about seeing any of that stuff"), Lily puts together a montage of her own journal entries plus newspaper clippings and formal and informal letters to and from jurors, as well as maps and pamphlets to trace the highly publicized case of a classmate's mysterious disappearance from the city zoo. The mystery's unraveling is fairly predictable, but the book's hyperbolic tone, all-in-fun parodies and hilarious illustrations (all of which center around an animal motif) will keep readers involved and entertained. At times the zoo theme becomes cloying (characters' names include Bob White, suspected of 11-year-old Perry Keet's murder, and Rhett Tyle, a parasitic mega-tycoon, as well as fellow jurors Fawn Papillon, an aging movie star, Anna Conda, designer of exotic fashions, and Bernie "Buzz" Ard, a gossip columnist). This three-ring circus, with Lily as capable ringmaster, will set in motion readers' flights of fancy from beginning to end, when a "wolf in sheep's clothing" receives his comeuppance and the innocent "jailbird" is set free. Ages 8-12.