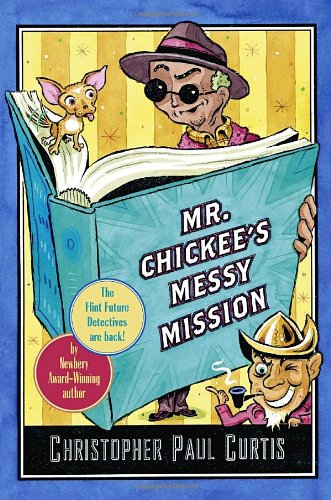 Infused with the same high energy found in , this second installment of the Flint Future Detectives series offers even zanier adventures with mixed results. Steven Carter and Russell Woods allow a new member into their sleuthing clan: Richelle Cyrus-Herndon, "the smartest kid at Clark Elementary," whose intelligence is as irritating (at least to Steven) as it is useful. The trio's first mission is to find the whereabouts of Rodney Rodent, Russell's tiny lost dog, who Russell believes disappeared inside a "horrible, frightening" mural advertising Vernor's ginger ale. Following the canine's path, the children soon find themselves entering an alternate universe where Steven's dear friend, Mr. Chickee, is waiting to greet them. According to Mr. Chickee, the magical place he calls "Ourside"—which holds as many surprises as Alice's Wonderland—is in danger of dying, and it's up to the Flint Future Detectives to prevent such a disaster. The novel's fast-paced action, hip dialogue, wacky characters and tangential commentaries (including some gentle jabs at J.K. Rowling) add some spice, but occasionally readers may find themselves yearning for fewer gimmicks and more connections between seemingly random events. Ages 9-12.