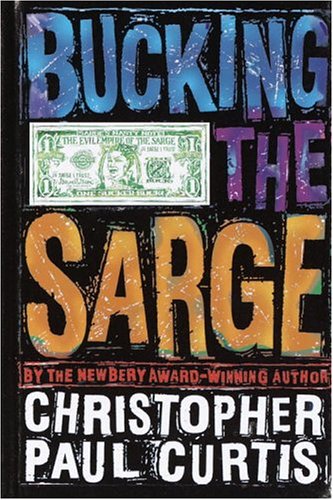 Curtis ( ; ) invites readers to visit present-day Flint, Mich., and to meet one of its wealthiest 15-year-olds, Luther T. Farrell. From the outside, narrator Luther's life might seem enviable. He drives a luxury vehicle, using a "for-real, honest-to-God, straight from the Secretary of State phony driver's license" that says he's 18. His education fund is worth $92,510 and he's a top student on his way to becoming the winner of the Whittier Middle School science fair for the third consecutive year. The down side: Luther is constantly kept under the thumb of his hyperstrict mother, "the Sarge," a woman who has lied, cheated and extorted her way to "own[ing] half the ghetto." When not in school, Luther is put in charge of doing the Sarge's dirty work, cleaning out the rat-infested apartments of evicted tenants and taking care of the elderly residents at the adult rehabilitation center owned by his mother. Happiness and independence seem out of Luther's reach until he devises a way to "buck" the Sarge the same way she has "bucked" the system. The hero's sense of humor and his interest in philosophy bring levity to Luther's bleak trappings. Featuring characters so lively they seem to jump off the page and a gratifying resolution in which all characters get their comeuppance, this vibrant modern-day battle between greed and morality proves that there is more than one way to come out on top. Ages 10-up.