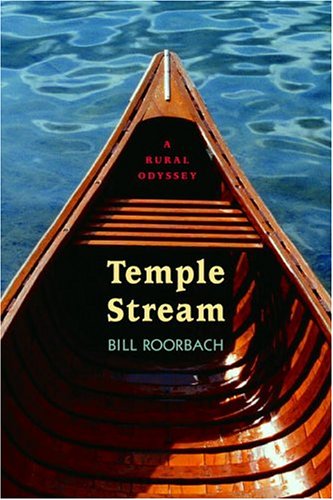 Roorbach ( ) takes readers on a journey in and around Temple Stream, which flows by his 1874 home near Farmington, Maine, about 40 miles northwest of Augusta. He records a series of forays along his stream, observing subtle environmental clues: the mix of trees, the types of garbage, the attitudes of local beavers, the varieties of birds and wildflowers. Sometimes his wife or their newborn baby accompanies him, sometimes neighbors, but more often just his two dogs. His essays on his perambulations sometimes include a dramatic incident—encounters with mountain man Earl or with the aptly named Ms. Bollocks—but usually there's just a single golden thought: for example, seeing caddis fly nets, he remembers calling them "wind socks" as a boy and then recalls a feeling he had, 40 years back, of being "late for dinner, all alone in his canoe, drifting homeward." Some themes thread through these essays: the progress of home improvements, his wife's pregnancy, his messages-in-a-bottle miraculously returned, his charting of Temple Stream back to its mysterious source. Roorbach's obvious delight in obscure phrasing—"streamside omphaloskepsis," "callipygian cowgirl"—should please literate stream walkers who enjoy a good browse in their dictionaries after a day's wander in the woods.