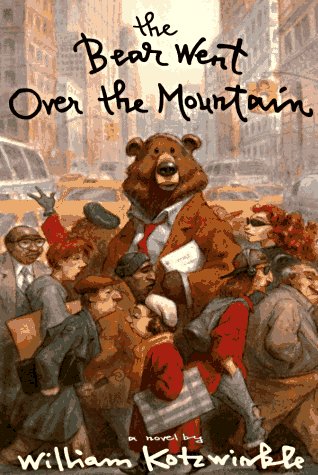 The Bear Went Over the Mountain

This is certainly the season for satirical looks at publishing. After Olivia Goldsmith's The Bestseller comes this delightful fable by Kotzwinkle (whose E.T. shares with Winston Groom's Forrest Gump the distinction of being its author's best-known title despite having been read by comparatively few people). Kotzwinkle has imagined a disconsolate Maine professor, Arthur Bramhall, who sets out to write a bestseller, only to have a bear steal it, thinking it's something to eat. This is no ordinary bear, however; he has aspirations to becoming a person (they eat so much better, and with much less trouble, than bears do). What better way to establish an identity than by becoming a celebrity novelist? Soon, the bear has found a pseudonym, Hal Jam, an agent and a publisher. With his distinctively masculine presence, and a monosyllabic way of talking that reminds many of Hemingway, he's on his way to stardom with a novel that everyone agrees has its roots deep in the natural world. Soon, he has a Hollywood agent, too, and the admiration of a Southern writer whose specialty is angels; both of them succumb to Hal's exuberant love-making (since a bear normally does it only once a year, a lot of libido is saved up). A pillar of the Christian right wants Hal's support for a run for the presidency, and Hal is only too willing, since he thinks ""candidacy,'' like most words he doesn't know, means something to eat. Meanwhile, Bramhall, who is turning into a bear as fast as Hal is becoming human, launches a lawsuit to recover his lost book. How it all works out, and how Hal finds himself a sequel, is the meat of Kotzwinkle's hilarious and sometimes touching parable. The book business is unmercifully skewered (having read only a few lines of the novel, Hal's publicity person writes a summary on which all interviewers depend), but the spirit is mostly kindly, and in Hal Kotzwinkle has created a real star. Movie rights optioned by Jim Henson Pictures; author tour. (Oct.)
close
Details