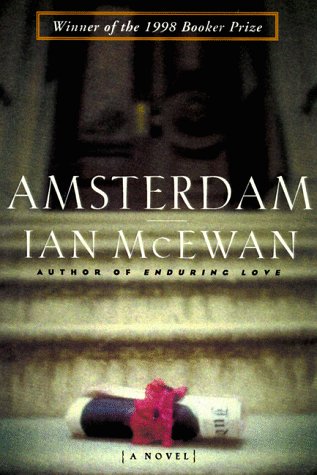 As swift as a lethal bullet and as timely as current headlines, McEwan's Booker Prize-winning novel is a mordantly clever--but ultimately too clever for its own good--exploration of ethical issues. Two longtime friends meet at the cremation of the woman they shared, beautiful restaurant critic and photographer Molly Lane. Clive Linley, a celebrated composer, and Vernon Halliday, the editor of a financially troubled London tabloid, could never understand Molly's third liaison--with conservative Foreign Secretary Julian Garmony, who is angling to be prime minister, or her marriage to dour but rich publisher George Lane. Mourning the manner of Molly's agonizing death, which left her mad and helpless at the end, each man pledges to dispatch the other by euthanasia should he be similarly afflicted. Immediately afterwards, both Clive and Vernon are enmeshed in a crisis: Clive must finish his commissioned Millennium Symphony so it can premiere in Amsterdam, and Vernon must grapple with the moral issue of publishing photos of Julian Garmony in drag that George has discovered with Molly's effects. The clash between whether the demands of pure art are more valid than political accountability and financial solvency soon assumes a larger dimension that turns Clive and Vernon into bitter enemies and inspires each of them to seek revenge by the same means. McEwan spins these plot developments with smooth alacrity and with acidulous wit, especially focused on the way shallow and mediocre people can occupy positions of power and esteem: ""In his profession, Vernon was revered as a nonentity."" His ability to sculpt a scene with such arresting visual detail that it assumes a physical dimension for the reader (most memorably in the opening of Enduring Love but also evident here as Clive observes a woman being accosted by a rapist, and as Vernon watches a TV interview that signals the end of his career) are undiminished. But when, in the last third of the book, McEwan manipulates the plot to achieve a less than credible symmetry, it is obvious that, despite the Booker recognition, this is far from McEwan's best novel. That said, however, it will undoubtedly hit the bestseller charts, for McEwan, even when not quite at the top of his form, is a writer of compelling gifts. Major ad/promo; author tour. (Dec.)
close
Details