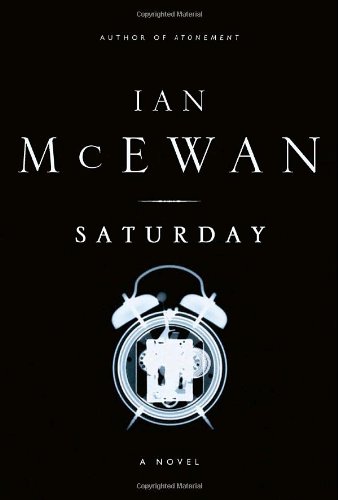 In the predawn sky on a Saturday morning, London neurosurgeon Henry Perowne sees a plane with a wing afire streaking toward Heathrow. His first thought is terrorism—especially since this is the day of a public demonstration against the pending Iraq war. Eventually, danger to Perowne and his family will come from another source, but the plane, like the balloon in the first scene of , turns out to be a harbinger of a world forever changed. Meanwhile, the reader follows Perowne through his day, mainly via an interior monologue. His cerebral peregrination records, in turn, the meticulous details of brain surgery, a car accident followed by a confrontation with a hoodlum, a far-from-routine squash game, a visit to Perowne's mother in a nursing home and a family reunion. It is during the latter event, at the end of the day, that the ominous pall that has hovered over the narrative explodes into violence, and Perowne's sense that the world has become "a commuity of anxiety" plays out in suspense, delusion, heroism and reconciliation. The tension throughout the novel between science (Perowne's surgery) and art (his daughter is a poet; his son a musician) culminates in a synthesis of the two, and a grave, hopeful, meaningful, transcendent ending. If this novel is not as complex a work as McEwan's bestselling , it is nonetheless a wise and poignant portrait of the way we live now.