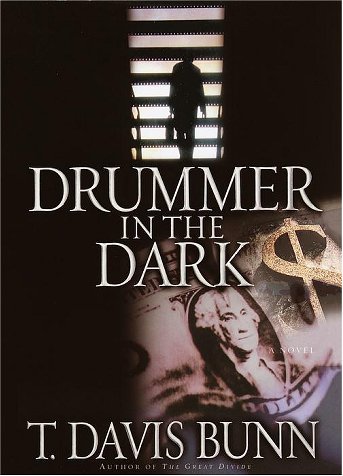 DRUMMER IN THE DARK

Taking its cue from two recent financial disasters (the Emulex story and the Barings collapse), this clever mix of politics, morality and high-tech suspense makes for a riveting thriller about (of all things) financial derivatives. Former high-tech guru Wynn Bryant is tapped by his brother-in-law, the new governor of Florida, to replace Congressman Graham Hutchings, bedridden with a stroke. His single mission: to help defeat Hutchings's pet piece of legislation, something called the Jubilee Amendment. Surrounded by scheming lobbyists, staffers who know more than he does and peers who dismiss him as a stand-in, Bryant's research into Hutchings's amendment puts him squarely in the path of Jackie Havilland, who's been hired by Hutchings's wife to find out who's been smearing her husband, and why. Both Bryant and Havilland find their investigations leading to the same source: infamous financier Pavel Hayek, head of the Hayek Group and mastermind of a secret plan that Hayek calls Tsunami. Since Bryant is ignorant of finance, his education in the details behind Tsunami, which involve the dangers of hedge funds and derivative financial instruments, is our education as well. Bunn () obviously knows his stuff—there's a scary reality behind this fiendishly simple plot, made all the more convincing by virtue of Bunn's financial expertise. And while the novel starts out slow, once the characters start bounding around the world from Rome to Cairo and the violence and danger escalate, the novel takes off. Bottom line: Bunn has crafted an intelligent, fast-moving novel about hedge funds; and if a writer can do that, he can do just about anything.