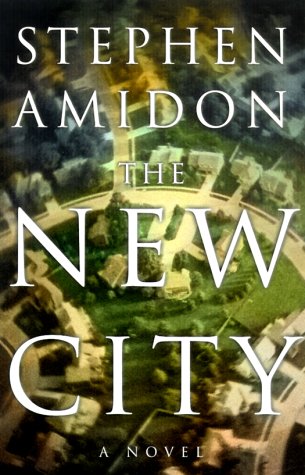 Amidon, an American writer who has lived in London for many years, was brought up, he tells us, in a ""planned city""--in his case, Columbia, Md.--and he has made such a city the setting for this ambitious and effective social drama, which offers a nod to Othello in theme if not quite in tragic dimension. Austin Swope is city manager of the community, still under development as the story opens and just beginning to be visited by the kind of racial problems the residents of such places went there to avoid. His best friend and closest colleague is Earl Wooten, the black construction chief who has dragged himself up from poverty to a level of power almost equal to Swope's own. And there's the rub: Swope convinces himself that Wooten is plotting behind his back to take his job; when Wooten's son Joel (who is also best friend of Swope's bright son, Teddy) becomes romantically involved with Susan Truax, a pretty, white girl from considerably lower in the social scale, the scene is set for what will eventually become a fearsome showdown. The time is 1973, with the Vietnam War winding down, the Watergate hearings in full swing and youthful drug taking the order of the day, and Amidon doesn't miss a beat in catching the tenor of the era (Teddy is a devotee of John Lennon and Yoko Ono, and thinks the rest of the Beatles are a waste of time). As in Shakespeare's original, Swope's endless conniving is somewhat baffling, and Wooten is given some tragic flaws that mar his large humanity. But there is the same inexorable sense of doom about the course of events, aided here by some powerful character sketches: Irma Truax, the racist German refugee who is Susan's mother; Wooten's wife, Ardelia, an ebony tower of strength to her bewildered husband; the calculating, bloodless execs back at the head office in Chicago. The plotting is adroit if sometimes overly contrived, the narrative grip fierce, and the book is head and shoulders above most commercial thrillers. What keeps it from attaining tragic stature is a certain glibness and flatness in the writing and an airlessness that is perhaps inevitable in so tightly focused a setting. (Jan.)
close
Details