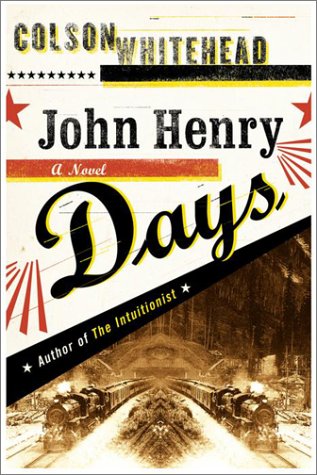 Death knells toll alike at the dawn of the machine age and the digital age, proclaiming an exhausted general collapse in this impressive, multilayered second novel by Whitehead ( ). Seizing on the story of American folk hero John Henry, the black railroad worker who beat a steam drill in a one-on-one contest and died in the act, Whitehead juxtaposes it with the soulless saga of 21st-century freelance writer J. Sutter, member of a junketeering tribe whose mores and speech are rendered with anthropological enthusiasm. J. and his fellow junketeers—notably Dave Brown, a former gonzo journalist whose best days were in the late '60s, and jittery One Eye, whose paranoia infects J.—descend on Talcott, W.Va., John Henry's supposed resting ground, to report on the U.S. Postal Service's release of a commemorative John Henry stamp. They coincide there with Pamela Street, the daughter of a deceased John Henry obsessive who opened a mad private museum in Harlem to celebrate the man, and Alphonse Miggs, a collector specializing in train stamps, whose secret agenda involves his newly purchased pistol. The debased countercultural cynicism of the junketeers, J.'s compulsive collection of factoids and receipts to fuel the print media machine, and the warped nostalgic longings of Pamela and Alphonse are funneled into a tornado-like narrative storm, bits and pieces of the John Henry myth spinning in the updraft. Whitehead (recipient of a 2000 Whiting Writers' Award) has the early DeLillo's sense for the sinister underside of Americana, combined with historical consciousness of the African-American middle-class in the post–civil rights era. Smart, learned and soaringly ambitious, his second novel consolidates his position as one of the leading writers of serious fiction of his generation.