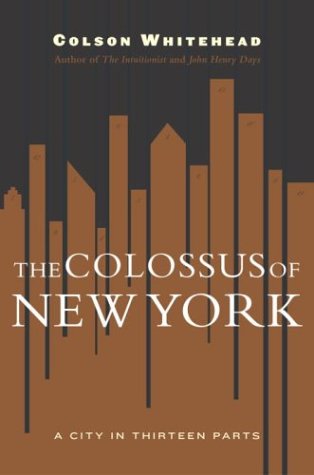 THE COLOSSUS OF NEW YORK: A City in Thirteen Parts

Whitehead (; ) lays out a wildly creative view of New York City. To out-of-towners, Gotham is about famous places, but Whitehead's New York is not. It's more about a way of seeing. For example, "No matter how long you have been here, you are a New Yorker the first time you say, That used to be Munsey's, or That used to be the Tic Toc Lounge... when what was there before is more real and solid than what is here now." Whitehead begins with the bus ride into Port Authority, complete with impossibly heavy baggage, bathrooms braved by only the desperate and the seating strategies of experienced bus riders. He cuts to city feelings: the morning's garbage truck noises; the problem of rain; coping with rush hour. When he does write of celebrated places—Central Park, Coney Island, the Brooklyn Bridge—it's for the role they play in our ritual life: when we go, how we are when we're there and how it feels to leave. Whitehead is a master of the minutiae of the mundane. He takes you to the moment of a subway train leaving without you: could you have made it if you'd left a few seconds earlier? Should you take a taxi? You check the tunnel for the next train, fusing with thoughts of time as new passengers accumulate on the platform. This 13-part lyric symphony is like E.B. White's set to the beat of Ellington or Cage.