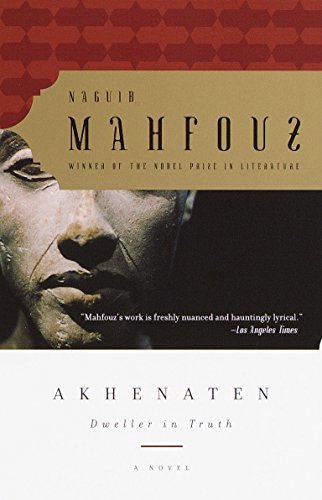 Nobel-winning Egyptian novelist Mahfouz (The Cairo Trilogy) appropriates, to wonderful effect, the craft of the biographer in these 14 elegant fictional testimonies on the brief but dazzling reign of the ""heretic"" pharaoh Akhenaten and his enigmatic queen, Nefertiti. First published in Arabic in 1985, newly translated into English, the narrative comprises many subjective versions of the early religious zealot Akhenaten's rule. Twenty years after the end of his reign, witnesses, royalty and relatives recount their stories to a young nobleman's son, Meriamun, who professes a passion for unearthing the truth. The particulars of Akhenaten's reign are unquestioned: the son of the great pharaoh Amenhotep III and Queen Tiye, Akhenaten is a sickly, irreverent and spiritually inclined young man who ascends the throne when his brother dies. Inspired by religious visions, Akhenaten scorns Egypt's traditional pantheism and declares his devotion to the One and Only God. When his fervor leads him to decree that his religion shall be Egypt's creed, the pharaoh offends the all-powerful priests and invites civil dissension and foreign invasion. Eventually, he dies alone in his deserted city. Some of the narrators remain sympathetic to Akhenaten, including the heartbroken former royal sculptor Bek, who designed the shining new city of Aketaten. The High Priest of Amun, on the other hand, bitterly rues the era of the ""mad king,"" while Ay, father of Nefertiti and former counselor to Akhenaten, diplomatically vacillates. The record culminates with Nefertiti's impassioned confession, though intentionally readers are left wondering: Which point of view are we supposed to believe? The making of history, like fiction, dwells in its infinite ramifications, and Mahfouz, ever the masterly stylist, accomplishes his lesson flawlessly. (Mar.)
close
Details