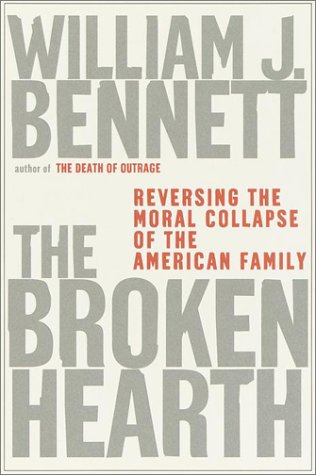 THE BROKEN HEARTH: Reversing the Moral Collapse of the American Family

Pointing to contemporary attitudes on divorce, homosexuality, children born out of wedlock, fatherlessness and cohabitation as challenges to the stability of traditional marriage, bestselling author and former secretary of education Bennett (; ) argues that people must take steps to restabilize the institution because "(t)he nuclear family, defined as a monogamous married couple living with their children, is vital to civilization's success." Articulate and impassioned as always, Bennett delivers a forceful defense of his position with selective quotations from studies like Sara McLanahan and Gary Sandefur's and by Sar A. Klevitan et al.; prominent politicians like former senator Patrick Moynihan; and literary sources from the Bible to the pro-lesbian children's book . Although Bennett refers in passing to being a child of divorce and offers the teachings of his Catholic faith as a template for marital constancy, he shares no personal anecdotes from his own presumably successful marriage. Nor does he quote interviews with other happily married couples or divorce survivors. As a result, the structure of the book resembles that of a legal brief (Bennett counts a law degree from Harvard among his many academic achievements). However, he does not include citations, as he would in a brief, for some of his more arresting pronouncements, such as, "Cohabiting couples show lower levels of sexual satisfaction than do married couples." In a too-brief discussion of remedies to reverse the trends he sees, Bennett proposes repealing no-fault divorce, reaffirming publicly the centrality of family with churches assuming moral leadership, tightening the payment structure for mothers with dependent children and supporting the Defense of Marriage Act.