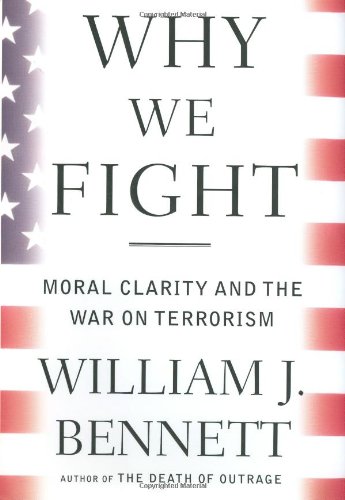 WHY WE FIGHT: Moral Clarity and the War on Terrorism

National morals arbiter Bennett takes America's reaction to the Sept. 11 terrorist attacks and uses it as a platform to discuss a half dozen of the major social and political issues—including the role of pacifism, patriotism, "Islamophobia" and support for Israel. His goal is to bolster support for the Bush administration's War on Terror, and in particular, convince readers that the U.S. is, quite literally, a "country worth fighting for." Bennett's point of view is anchored in the "righteous anger" he feels Americans are justified in feeling against al-Qaeda. To rally the cause, he invokes all the righteous institutions of America—the church, the state, the family—except our well-regarded ability to tolerate different points of view. Unfortunately, his own anger is directed internally, at the members of the so-called cultural elite—mostly journalists and educators—who would call into question America's clear mandate to retaliate. This elite, he says, is trained on relativistic, postmodernist theory rather than on what he calls common sense. In so doing, he extrapolates unreasonably from the behavior of a small group of individuals, such as a few university studentss quoted in the press, and applies its thinking to larger class of college students. Further, Bennett excels at simplifying issues to the point where black and white appear out of gray. When he concludes that "why we fight" is to prevent al-Qaeda from acquiring chemical and biological weapons and using them for mass destruction, it is easy to agree with him. But when he condemns self-criticism as a national pathology, his words lose their value. For what is this book, if not a product of self-criticism? Bennett rarely ventures beyond his personal convictions. Stirring it may be, but edifying regarding the complexities of America's present situation it is not.