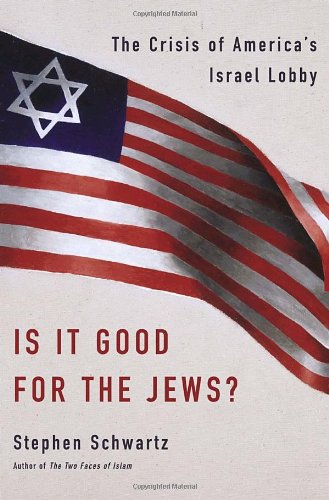 Is It Good for the Jews? The Crisis of America's Israel Lobby

In this broadside against conventional American Jewish political thinking, Schwartz ( ) repeatedly poses the question "is it good for the Jews?"—concluding that neoconservativism would be, but the Democratic Party isn't. Schwartz (a convert from Judaism to Islam) argues that the community's leadership, including pro-Israel lobbying group AIPAC, has let down its constituency by failing to embrace neoconservativism's "universal, humanistic and liberal values" and inadequately responding to the "tidal wave of Jew-baiting" he believes preceded the Iraq war. Yet he backs his claims with speculative statements, while dismissing others' positions as "mak[ing] no sense" or insulting the messengers (e.g., "incompetent Western journalists and bought-off policy experts" are behind the dubious notion of an al-Qaeda/Saddam Hussein connection). The last sentence declares AIPAC to be "on the edge of its demise," but Schwartz provides no data to support such a prediction. He offers only an account of the spy scandal in which AIPAC has been embroiled since 2004, which led to tension with the administration, but which, Schwartz admits, also led to "an exceptional upsurge in donations" to the organization. Though the book has little to recommend it, it's likely to make waves regardless.