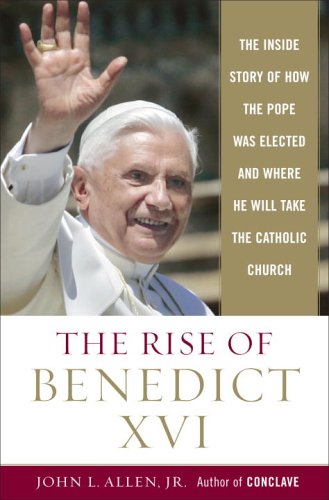 The Rise of Benedict XVI: The Inside Story of How the Pope Was Elected and Where He Will Take the Catholic Church

When Pope Benedict XVI walked onto the balcony of St. Peter's Basilica on April 19, it was the first time that many people had ever heard of him. But for the last 24 years, the former Cardinal Joseph Ratzinger of Germany was a celebrity in Catholic circles, widely known for his intellectual prowess and his role as the Vatican's notorious defender of the faith. Allen's book seeks to fill in the blanks about the man known in the media as "God's rottweiler," revealing a person who cannot be summarized in a catchphrase. But this book isn't just an examination of the new pope's Christian principles; it is also a glimpse into the inner machinations of the Vatican, which Allen covers for the and from time to time on CNN. Drawing on his many sources—including eight cardinals who participated in the conclave that elected Pope Benedict—Allen gives a play-by-play assessment of how the pope was chosen and what he might have in store for the church's 1.1 billion followers. Readers who want a cloak-and-dagger political whodunit should look elsewhere. Allen's book is much smarter than that; it's a rich and thoughtful analysis of the present-day Catholic Church and its complex new spiritual leader.