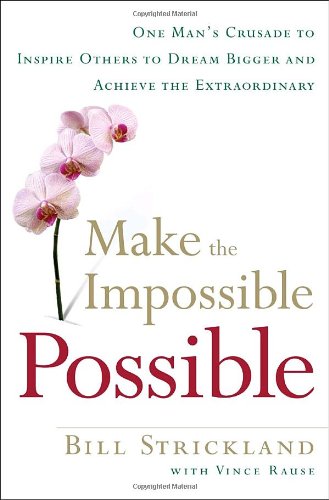 Make the Impossible Possible: One Man's Crusade to Inspire Others to Dream Bigger and Achieve the Extraordinary

Community activist and MacArthur fellow Strickland explains the jazz expression “tell your story” as “playing that doesn't just display your virtuosity, but also gives the audience a glimpse of your soul.” He succeeds in doing just that. We get the virtuosity: he was an African-American kid from Pittsburgh's inner city who at 19 established what became Manchester-Bidwell, the now famous arts and job-training center for disadvantaged kids and adults. And we get the soul: he was spurred on by a mother who taught him to polish a wood floor until it gleamed no matter what was going on in the streets outside; an art teacher who believed in the “aimless” boy; a classroom where coffee brewed, jazz played softly, and he had the transformative experience of throwing his first clay pot. It's the American dream with a twist: for Strickland, it was never about shedding his past and getting ahead but about following his bliss and making a difference. Which is not to say the skilled fund-raiser isn't savvy. He touts the value of a Brooks Brothers suit and knowing the right people. Unfortunately, we don't learn how Strickland's philosophy of making the impossible possible applies to his—or our—personal lives.