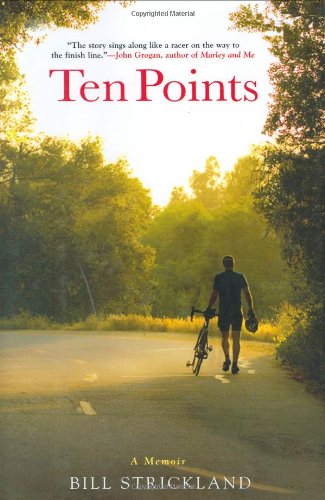 The executive editor of magazine explores childhood, fatherhood and cycling in this moving memoir about the legacy of child abuse and the healing power of sport and family. In Emmaus, Pa., in 2004, 39-year-old Strickland decided to take up a near-impossible challenge proposed by his preschool-age daughter, Natalie, to score 10 points in a single season; to do so, he has to place among the top fourâ€”10 timesâ€”in a local weekly race populated by Olympians and cycling legends. Alternating between present-day life and dispatches from his horrific childhood, Strickland introduces his sadistic father, a man who put a loaded gun in his son's mouth, made him eat dog feces and encouraged him to have sex with his babysitter, among other outrages. Strickland juxtaposes these episodes with scenes of his own shortcomings: unbridled anger with his daughter and marital infidelity with a colleague. It's only through numerous races (and missed points) that he learns to tame the inner demons that threaten his new family. Strickland's lyrical prose and swift pacing lighten the material's weight, but it remains a necessarily brutal read that goes several shades darker than most sports memoirs; though noncyclists may get bored during the race scenes (and there are plenty), anyone dealing with familial abuse will find Strickland's journey an inspiration