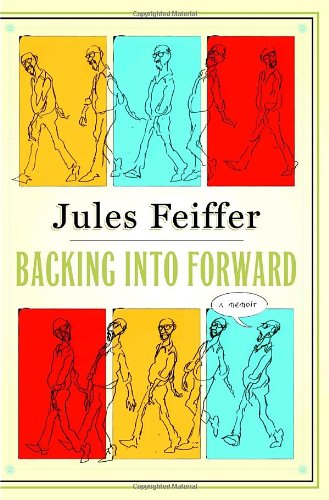 Backing into Forward: A Memoir

Before Feiffer received a 1986 Pulitzer Prize for editorial cartooning, his animated won an Oscar in 1961. His career encompassed everything from comic strips ( ; ), novels ( ) and plays ( ) to children's books ( ; ), nonfiction ( ) and screenplays ( ; ). Retracing his path of past creative pursuits, he takes anecdotal detours to introduce the talented people he met along the way. As a kid (he was born in 1929), drawing comic strip characters on the sidewalk was a way to avoid Bronx bullies: “I was never not afraid.” Serving an apprenticeship with cartoonist Will Eisner, he felt he was a fraud (“My line was soft where it should be hard, my figures amoebic when they should be overpowering”), so he instead graduated to ghostwriting Eisner's . His account of hitchhiking cross-country invades Kerouac territory, while his ink-stained memories of the comics industry rival Michael Chabon's Pulitzer Prize–winning fictional portrait. Two years in the military gave Feiffer fodder for the trenchant Munro (about a child who is drafted). Such satirical social and political commentary became the turning point in his lust for fame, which finally happened, after many rejections, when acclaim for his anxiety-ridden strips served as a springboard into other projects. Writing with wit, angst, honesty, and self-insights, Feiffer shares a vast and complex interior emotional landscape. Intimate and entertaining, his autobiography is a revelatory evocation of fear, ambition, dread, failure, rage, and, eventually, success.