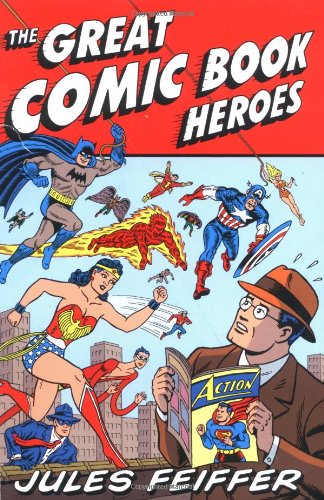 Feiffer ends his fabulous 1965 essay on comic book history with an argument that comics are "junk," but that junk is good, even necessary. Taken on their own terms, comics deliver exactly what they should: base, escapist entertainment. This work was first published as a hardcover volume accompanied by 127 pages of color reprints, now omitted. The new, slim volume is a personal and critical history of the medium from 1937 to the early 1950s, mixing Feiffer's impressions of comics, and labor in them, with a powerful history of the business. He begins by recounting his love of comic strips, then dissects the appeal of the first comic books: "The daily strips, by their sleek professionalism, held an aloof quality which comic books, being not quite professional, easily avoided. They were closer to home, more comfortable to live with, less like grown-ups." He follows the comic book medium as it births Superman, Batman and all of the rest and cheekily examines various art techniques. Feiffer also looks at the comic book/juvenile delinquency controversy of the 1950s and the effect WWII had on the medium. His commentary is still relevant (and still among the best) today because it explains comics' appeal panel by panel, making immediately clear why this "junk" is so exciting. In the final chapter, Feiffer describes his own late entry into comic books (he worked for Will Eisner, of fame) with awe and regret.