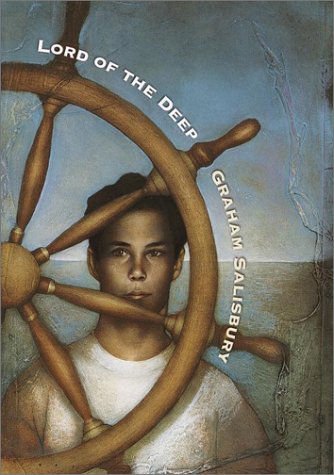 LORD OF THE DEEP

As in his previous books (; ), Salisbury navigates familiar waters—those surrounding the Hawaiian Islands—for a diverting and dramatic coming-of-age tale. Thirteen-year-old Mikey Donovan still can't believe he's the new deckhand on his stepfather Bill's charter boat, the . Mikey calls Bill "Lord of the Deep" because he believes Bill is "the best deep-sea charter-fishing skipper there was." In addition to learning fishing secrets from a master, Mikey gets to spend quality time with his mother and his younger half-brother. The idyllic working situation hits a snag, however, when two loutish adventurers hire the for a three-day fishing excursion to bag an impressive marlin. When a big catch suddenly becomes a possibility, Mikey faces a moral dilemma that shakes him to the core. Salisbury frames his tale within the rhythms of Mikey's island routines, carefully describing the preparations and maintenance required for a successful fishing operation and unfolding events in the span of little more than a day. He also puts readers in the middle of some thrilling sports action as the anglers try to land their prey. A subplot about Mikey's biological father is never clearly resolved, but brilliant depictions of water and sky and a number of tender moments that reveal more about Mikey, Bill and their close relationship further strengthen the story. Ages 10-up.