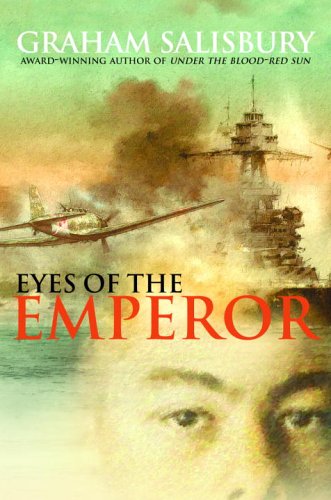 Eyes of the Emperor

In the fall of 1941, Eddy Okubo, 16, alters his birth certificate to enlist in the U.S. Army, serving alongside his older "dock dog" buddies who are completing boot camp in their native Hawaii. Eddy's father, a boat builder of Japanese descent, is initially aghast, but after the "cowardly and shameful" sneak attack on the U.S. fleet in Pearl Harbor, realizes his son has acted honorably. Eddy has second thoughts when he and his mates report for duty and find themselves under suspicion—indeed even under armed watch at times—solely because of their ancestry. Asked repeatedly to prove themselves, Eddy's unit members do their job and maintain their dignity until one assignment rattles the men's resolve. Based on a real experiment that took place on an island off Mississippi, Eddy and other Japanese-American soldiers are used as "bait" for dogs the Army is training to hunt and kill enemies in the Pacific. (In an author's note, Salisbury reports interviewing eight of the 26 actual participants.) The novel brims with memorable and haunting scenes—the chaos that ensues in Honolulu after the bombing, the Japanese sailor who is so disgraced after his capture that he asks to be shot, the dog training which involved laying horsemeat on the soldiers' necks to teach the dogs to go for the kill. A companion novel to Salisbury's , this is a valuable and gripping addition to the canon of WW II historical fiction from a perspective young readers rarely see. Ages 12-up.