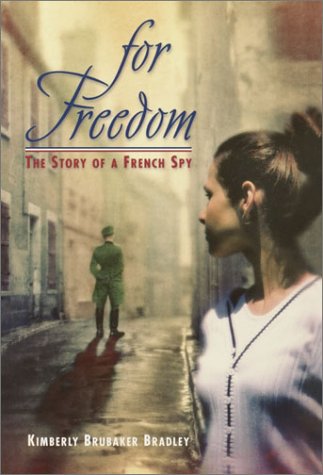 FOR FREEDOM: The Story of a French Spy

Based on a true story, Bradley's () gripping, high-stakes adventure about a French girl who joins the Resistance during WW II offers insight into a young spy's sacrifices and bravery. When the Germans begin to occupy France, 13-year-old Suzanne, who narrates, focuses more on her dreams of singing professionally than on the war she thinks could never hurt her. She tries to follow her pragmatic father's repeated admonition, "Obey the rules and no one gets hurt." But her views change when a bombing leaves her best friend mute from trauma, German soldiers seize her family's home and she realizes "sometimes people disappeared." Family relationships and the intensely personal price of war prove more strongly sketched than Suzanne's love of music, even though it is the travel occasioned by Suzanne's growing success in the opera that makes her useful to the Resistance. Bradley effectively portrays the initial allure when the family doctor recruits Suzanne, then 16, as "number twenty-two" (names would be too dangerous to use), and then gradually tarnishes that glamour to reveal the heavy burden, isolation and imminent danger. While one or two touches seem forced (particularly when Suzanne is betrayed), the details and the tone have the ring of authenticity. A highly compelling look at the covert battle for freedom. Ages 10-14.