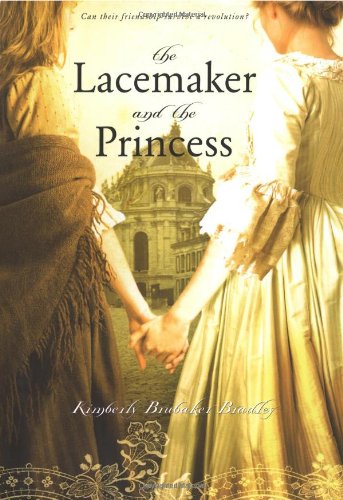 The Lacemaker and the Princess

Bradley ( ) gives readers a glimpse of the overwhelming poverty the French people suffered before the French Revolution and juxtaposes it with the luxuries enjoyed by their royals. Eleven-year-old Isabelle lives with her mother and grand-mère in poverty, eking out a meager living by making lace; her older brother, George, supplies a few coins from his job as a palace stable hand. One day, Isabelle delivers a piece of lace intended for the Princess of Lamballe and literally runs into Queen Marie Antoinette. She is introduced to Princess Thérèse, who desires Isabelle to be her playmate, thus beginning a somewhat odd friendship and Isabelle's dual life. In the morning she helps her mother and grand-mère make lace; in the afternoon she lives a fairy-tale life. As Isabelle becomes more involved with palace life, George forces her to see the growing unrest caused by the king and queen's lavish spending and scant regard for the peasants. Fans of historical fiction will enjoy the numerous details about Louis, Marie Antoinette and Versailles that are neatly woven into the story and will be further be drawn into Isabelle's adventure as she flees the palace as it is attacked by angry peasants, thus ushering in the French Revolution. Ages 8-12.