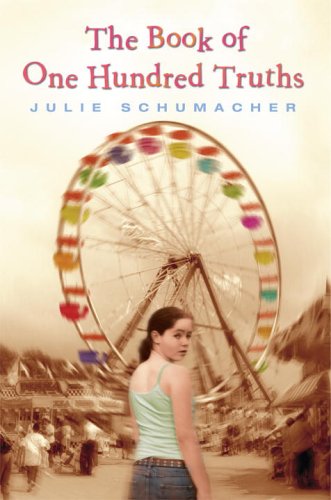 The Book of One Hundred Truths

Like her , Schumacher's latest story follows a sympathetic preteen as she fumbles her way toward adulthood. As the novel opens, 12-year-old Theodora Grumman sets out for her annual summer visit at her grandparents' home at the Jersey shore. But this year, her mother hands her "a notebook of truths." The woman explains, "You can write anything you want in here as long as every single thing you write is true." Gradually, readers learn that Thea began lying in February, due to a near-tragic event that she has promised to keep secret, and her mother's gift proves to be the key to unlocking it. The notebook's 100 truths begin benignly ("Truth #3: I don't know what to write in this notebook"), but soon clue readers in to Thea's anxieties and even her sense of humor, as events in the narrative trigger her entries. For instance, when her seven-year-old cousin and roommate, Jocelyn, becomes a "miniature shadow," Thea writes, "Truth #5: I really, really don't like sharing a bedroom." But Jocelyn carries a secret of her own, and as the book progresses, she acts as the perfect catalyst both to pull Thea away from her overburdened thoughts and to trigger Thea's confiding of her disturbing secret. The lessons the two learn feel genuine, as do the relationships among other members of this big, boisterous extended family. With their help, Thea learns that everyone makes mistakes and that telling the truth, no matter how difficult, is always better than lying. Ages 9-12.