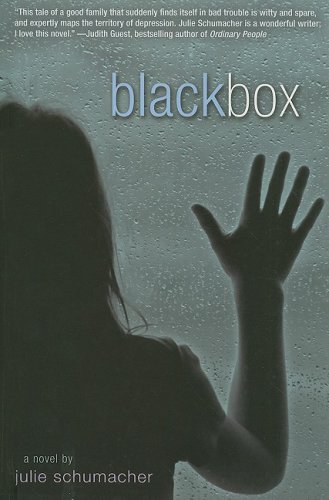 Lena Lindt and her older sister, Dora, have always been close, like “right and left hands laced tight together.” They and their parents accept that Dora is the moody but fun one, “a storm on the horizon, [Lena] the needle that always pointed to ,” a formula that works until Dora is overcome by severe depression in her junior year of high school. Schumacher's ( ) characterizations are humane yet shaded: to combat the effect of Dora's illness, Mr. and Mrs. Lindt send the outwardly coping Lena to a therapist but treat Dora's eventual hospitalization like a shameful secret. Lena, meanwhile, feels an us-against-the-parents bond with her sister, who uses their intimacy to pressure Lena to keep secrets that may be endangering her recovery. The title refers to the drugs prescribed for Dora; at least one comes with a “black box” warning, meaning that the person taking it is at increased risk for suicide and needs to be watched closely—traditionally, Lena's job in the family. An expert use of metaphor, combined with sympathetic insight into the impact of depression on families, turns a painful subject into a standout novel. Ages 12–up.