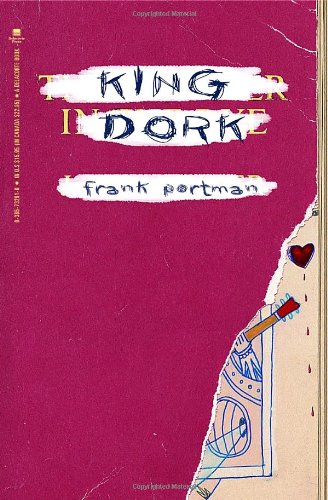 Told from the perspective of Tom, a "brainy, freaky, oddball kid who reads too much, [and is] so bright that his genius is sometimes mistaken for just being retarded," this debut novel expresses a cynical view of high-school life and a teen's passion for rock music. Much of the story focuses on a seemingly endless string of humiliations and tortures dished out by Tom's teachers and sadistic "psychotic normal" classmates. A more compelling and subtly drawn subplot details mysteries that Tom is trying to solve: Was his father's death a few years earlier really an accident? What is the meaning of the coded messages found in his father's copy of ? (The key role of Salinger's novel is hinted at by this book's telltale vintage burgundy cover, on which "King Dork" is written over Salinger's title.) When he's not playing Sherlock Holmes or dodging bullies (the types who "try to trip you anonymously and knock you over as you go by in the hallway"), Tom daydreams about the band he plans to form with his only friend Sam. Budding rock musicians and students with a grudge against the public-high-school scene will most relate to Tom's narrative. If the protagonist's battle with peers and a tyrannical associate principal grows a little tedious at times, the author's biting humor and skillful connection of events will keep pages turning. Ages 14-up.