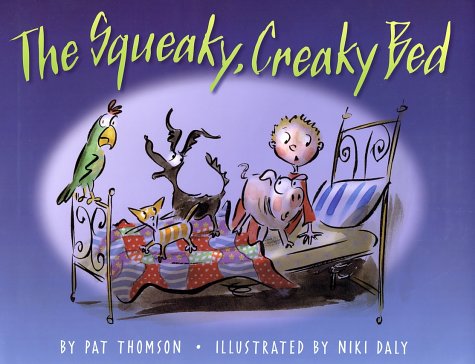 The eponymous antique bed casts a pall over a boy's otherwise idyllic visit to his beloved grandparents. So Grandpa (who favors I-Ching patterned pajamas by night and a Woodstock-era wardrobe by day), decides what's called for is animal companionship: first a cat, then a dog, a pig (its dubious expression on the ride home with grandpa is priceless) and, finally, a parrot. But the bed keeps squeaking and creaking in the lavender-hued darkness, and each animal adds a new note of misery to the cacophony, led by the boy's "" British author Thomson's straightforward prose keeps the story moving, while her restrained use of repetition adds a lilting rhythm. Daley's () similarly recurring checks, polka dots and stripes, plus the patterned quilt on the boy's bed, create a sense of reassurance under all the frenzy. His elegantly fluid ink line and wide-eyed characterizations steadily escalate the comic chaos, until it finally dawns on Grandpa that what the boy needs is not yet another pet, but a new bed. The quietude brought on by this final acquisition looks like it might launch a problem all in its own—but the parrot offers an ironic solution: a lullaby of "squeak, squeak, creak!" Ages 2-6.