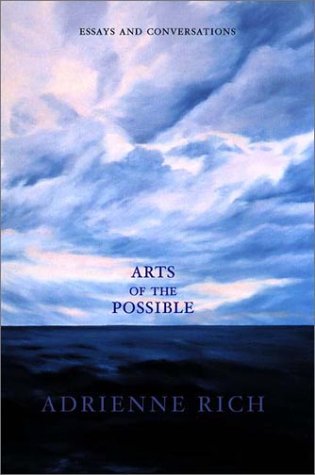 ARTS OF THE POSSIBLE: Essays and Conversations

Adrienne Cecile Rich, ARTS OF THE POSSIBLE: Essays and Conversations

Rich's engaging new collection of essays reaffirms what Norton editors declared some 25 years ago: the "private poet" has gone public, "without sacrificing the complexity of subjective experience or the intensity of personal emotion." This certainly holds true for Rich the essayist as well, for she has firmly established herself as a major American poet and intellectual most concerned with the intersection of the public and private, the social and personal. The overarching goal of her intellectual project is to discover what's imaginatively possible in a cultural system debased by economic, social and political injustice, which, she suggests, are perhaps inherent in capitalism. While her powerful and frequently anthologized essay on "compulsory heterosexuality" is not included, the equally famous and influential " 'When We Dead Awaken': Writing as Re-Vision" leads off the collection. This 1971 feminist tract brilliantly strategizes how women can re-examine literature and culture in order to resist patriarchal hegemony and give voice to their own experience. Other notable entries include "Blood, Bread, and Poetry: The Location of the Poet," which posits that "political struggle and spiritual continuity are meshed"; the title essay, a consideration of, among other issues, identity politics; and the spirited 1997 essay-letter that explains why she declined the National Medal for the Arts. As Rich herself acknowledges in the foreword, a few of the essays "may seem to belong to a bygone era." They provide, however, a prism through which to view Rich's thinking over the years, and they neatly demonstrate the transformations in her views over time. While the essays, "notes" and "conversations" may be read individually, what's perhaps most fascinating—and rewarding—about this collection is charting Rich's intellectual journey itself.