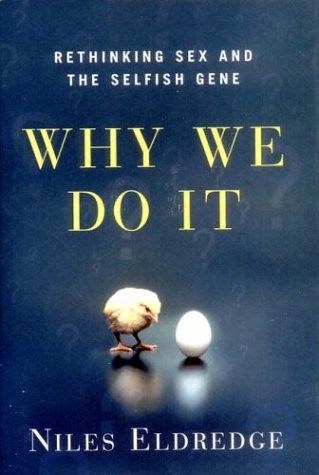 WHY WE DO IT: Rethinking Sex and the Selfish Gene

As the title promises, this is all about sex, but not the way you might think. Eldredge ( , etc.), a paleontologist and curator at the American Museum of Natural History, believes that sociobiologists like Richard Dawkins and E.O. Wilson are dead wrong in their explanation of life as a mechanism by which "selfish genes" try to propagate and ensure their own survival. Explaining that life as we know it combines two drives, one economic and one reproductive, Eldredge writes that "the drive to eat and simply stay alive" is as fundamental as the drive to reproduce. In fact, he argues, the very fact that we've evolved to have sex, a "horribly inefficient way of passing genes along," seems to indicate that there's more at play in our sex lives than the machinations of selfish genes. Eldredge persuasively describes sex itself as having been "decoupled" from reproduction and bound up with the economic side of human life (sex for "fun, profit, and power," as he puts it). While at moments it can be a bit difficult to wrap one's mind around his argument, Eldredge has thankfully picked up at least one thing from the sociobiologists: their clear and friendly prose style (among other things, the book contains perhaps the most accessible overview available of the history of evolutionary biology). Eldredge doesn't offer as simple an answer to his eponymous question as those against whom he is arguing, and his insightful thesis that genes alone do not govern human behavior is bound to provoke controversy in the evolutionary biology world.