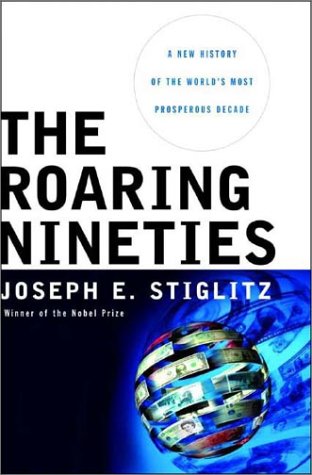 THE ROARING NINETIES: A New History of the World's Most Prosperous Decade

As an economic adviser to President Clinton and a World Bank official, Nobel Prize winner Stiglitz () had a front-row seat for the financial boom of the 1990s. He discusses how, contrary to all theory, reducing the national deficit led to the economic upswing, but his interest lies not in how the bubble happened but in those qualities that eventually led to its collapse. One of his chief arguments is that although efficient markets depend upon the free flow of information, deregulation enabled corporations like Enron to present distorted financial data, "stealing money from their unwary shareholders" in the process. Financial analysts also withheld frank assessments from investors to maintain their insider status, and the "conflicts of interest gone out of control" inevitably led to disaster. The book suggests Federal Reserve chairman Alan Greenspan could have slowed things down, but failed to back up tentative public remarks with firm action. The Clinton administration also comes in for some of the blame for pressuring foreign countries to adopt policies it wouldn't apply to its own economy. But the largest portion of the blame is doled out to George W. Bush for mishandling the initial stages of the recession, allowing it to spiral dangerously in the name of free markets. Instead, Stiglitz calls for just enough regulation to promote what he dubs "Democratic Idealism," a fairly standard liberal platform of social justice and economic reform. Whatever one thinks of his long-term goals, the straightforward and well-reasoned summation of the last decade's market trends has a convincing ring of truth.

In our review of Edwin Black's (Forecasts, Aug. 25), the phrase "dirty little secret," describing the American eugenics movement, appeared to be attributed to Black. In fact, the phrase is the publisher's, and has not been used by the author.