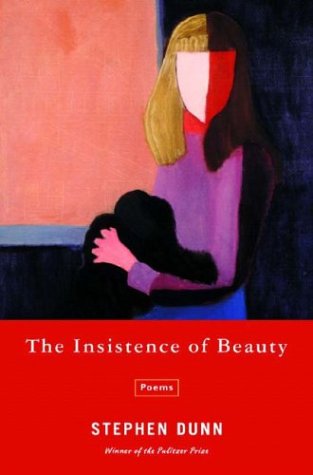 The Insistence of Beauty: Poems

In this moody, introspective collection, Dunn, winner of the 2001 Pulitzer Prize in poetry, focuses on lost love and domestic solitude following the break-up of a long-term relationship. The speaker, alone, stares at his furniture and makes desolate pronouncements like ""your rocking chair/ isn't rocking anymore."" Or, he remembers his ex-wife's gourmet dinners and, heavy-handedly, finds in them an analogue of the failed relationship: ""Too cruel, I know, but you made me want more,/ and I consumed and withheld."" These poems are plain-spoken and small in their ambitions, suffused with a deep sense of fatigue. Only the slow revelation of marital infidelity (and the frisson of having told new women old stories) seems to enliven the speaker, and then only briefly. In the latter part of the book, Dunn seems to cast about for larger themes, and in a few unfortunate poems tries politics, indulging in comments such as: ""Ground zero, is it possible to get lower?"" The poems feel sad, small and wholly out of touch with the broader world, because there is no necessity discernable behind them: ""That was when I realized/ that to believe in nothing/ is a belief too, and not much fun/ either..."" After a few peripheral glances at the war on TV, and a nod to Casablanca, the book seems to find a philosophical resting place in defense of the obvious and the sentimental: ""For years I'd taken pride in resisting// the obvious--sunsets, snowy peaks,/ a starlet's face--yet had come to realize/ even those, seen just right, can have/ their edgy place. And the sentimental,// beauty's sloppy cousin, that enemy,/ can't it have a place too?"" In some sense, this is where we've been heading all along, but without much insistence.
close
Details