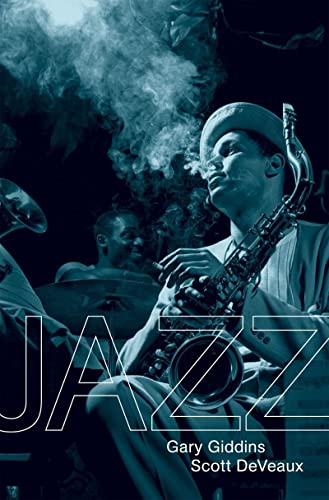 The difficulties of writing cogently about jazz—of discerning musical regularities in a genre built around improvisatory jams, and a narrative thread that transcends haphazard biography—are admirably addressed in this history. Critic Giddins ( ) and historian DeVeaux ( ) have an easier task in the book's first half, which traces jazz's coalescence in New Orleans out of varied strands of black music, its shaping by Armstrong, Ellington and other giants and its efflorescence in the big band era as the soundtrack of the American century. The tune grows unavoidably less catchy as postwar bebop and successor avant-garde tendencies transform jazz into a “self-conscious art music” epitomized by John Coltrane's “existential squawk.” (The authors maintain a cordial respect for every strain of modern jazz except Kenny G: “There are many things to dislike about smooth jazz—for example, everything,” they sputter.) The multimedia work contains moment-by-moment exegeses of classic recordings (“2:13: [Artie] Shaw's line climaxes on a dramatic high note”) that readers can find on the publisher's Web site, along with study aids. The authors' fluent, engaging treatment mixes scholarly lore and sociocultural analysis with piquant character studies and rapt evocations of musical artistry; the result is a treasure-trove for fans and students alike. Photos.