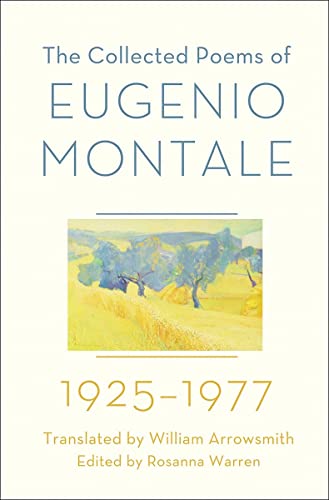 The Collected Poems of Eugenio Montale

Perhaps the major poet of 20th-century Italy, Montale (1896–1981)—who won the Nobel Prize in 1975— now seems like three poets in one. His first book, Cuttlefish Bones, announced a vividly sensuous yet self-skeptical man closely tied to Liguria, the dry coastal region where Montale grew up: “Bring me the sunflower, I’ll plant it here,” he announced, “in my patch of ground scorched by salt spume.” Montale’s next phase spanned WWII and its aftermath; odes on a vital yet damaged Europe (such as “The Eel”) abut tormented, crystalline sets of love poems about two lost women, one called Clizia, the other the Vixen. Enormously influential on the Continent, these poems can seem overwhelming, but also melodramatic, in English, even in the hands of the much admired career translator and classicist Arrowsmith, who died in 1992. This new facing-page edition could make its greatest mark with the third, disillusioned, astringent Montale, the author of “Xenia”—spare elegies for his wife—and of several collections afterwards; these last books traffic in disillusion, offhand flatness, caustic sadness, their “Muse... dressed like a scarecrow/ awkwardly propped on a checkerboard of vines.” Montale is no stranger to U.S. tastes: Robert Lowell championed him, and earlier translations by Arrowsmith and by Jonathan Galassi received wide notice. This big book, though, appears to be the first collection in English to include everything Montale chose to publish in Italian; it will surely get this complex, grand, ambitious and finally disillusioned poet a fresh burst of posthumous fame. (Jan.)
close
Details