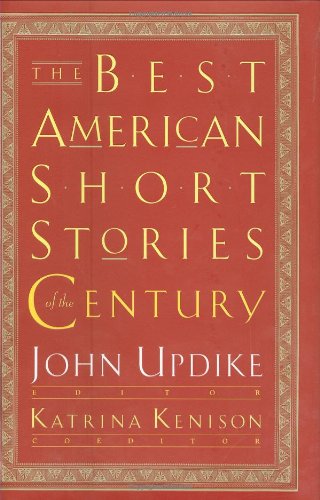 The Best American Short Stories of the Century

The task had to be daunting, selecting the 55 stories that grace this volume. The title alone is daunting: the best? But the riches contained--including a foreword by Kenison and a deft introduction from Updike--prove the title accurate. Consider the resources mined: 2000 stories anthologized in annual best-of volumes since 1915. Although certain notable story writers, John O'Hara for one, never made it into the series and others who did have been crowded out of this volume, the stories excavated and displayed herein are gems. Often these are the gems one would expect--such as John Cheever's balance of the magical and the sinister in ""The Country Husband,"" about an inappropriate desire that floods a man after a plane crash. What story captures better than ""Greenleaf"" Flannery O'Connor's affrontery before Protestantism and her vision of unearned grace? And would readers expect anything less of Dorothy Parker than ""Here We Are,"" a scathing yet poignant depiction of a newly married couple bickering like old retirees? Indeed, the volume includes such signature stories as Joyce Carol Oates's ""Where Are You Going, where Have You Been?,"" Cynthia Ozick's ""The Shawl,"" Raymond Carver's ""Where I'm Calling From"" and Tim O'Brien's ""The Things They Carried."" But some stories here by the well-known are not necessarily the best known. Fitzgerald is represented not by ""Babylon Revisited"" but by ""Crazy Sunday,"" about the perilous life of a screenwriter employed at a director's whim. The transient world captured in Eudora Welty's ""The Hitch-Hikers"" seems far removed from the homier gardens, parlors, and post offices familiar from her other fiction. And readers can be grateful that Updike chose not ""The Magic Barrel"" but Bernard Malamud's ""The German Refugee,"" a tale that ends with a dark if O. Henry-like reversal. In Kenison's words, these stories are ""an invaluable record of our century."" The book opens with Benjamin Rosenblatt's ""Zelig,"" a tale of an immigrant who longs against reason to return to Russia. Immigration is a recurring theme, picked up again in Alexander Godin's sadly ironic ""My Dead Brother Comes to America,"" And that we are nearly all descendants of immigrants is --as apparent in Willa Cather's ""Double Birthday"" or Saul Bellow's ""A Silver Dish"" as in Gish Jen's bitterly funny ""Birthmates,"" about a Chinese-American as trapped by his self-definition as by the racism of others. In his introduction, Updike writes, ""The American experience... has been brutal and hard."" The stories bear this out. In Elizabeth Bishop's ""The Farmer's Children,"" two boys freeze protecting their father's equipment, while in Grace Stone Coates's lovely ""Wild Plums,"" a young girl is forbidden to gather fruit with a family her mother deems socially inferior. Life on this continent may be brutal, but this extraordinary collection offers up dazzling writing that salves the wounds, as well as stories full of the pleasures of life. (Apr.)
close
Details