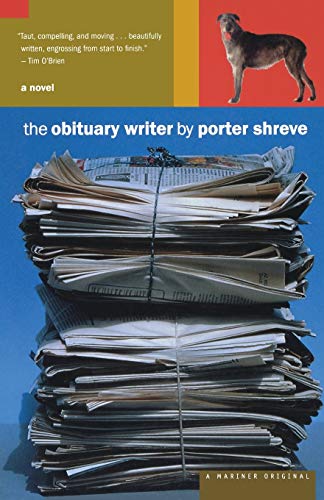 Balancing lies and reality is a complex pursuit in Shreve's first novel, a poignant coming-of-age story centering on an aspiring journalist, Gordon Hatch, eager to live up to the standard set by his late father, a renowned reporter who covered John F. Kennedy's assassination and its aftermath. Gordie, 22, is presently a lowly obituary writer, a job he takes seriously, preparing a file of ""advancers,"" obituaries of elderly famous people. He gets a phone call, which might be his first scoop and lucky break, from Alicia Whiting, a young widow, who pulls Gordie into the heart of her own pathological identity crisis. While trying to hide the truth of his humble job at the St. Louis Independent from his mother, who constantly compares his career to that of his father, and from Alicia, who quickly becomes his lover, Gordie weaves a web of lies nearly impossible to escape. But Gordie's web is nowhere near as complex as Alicia's, and as he faces some shocking truths about his lover, and about his parents, Gordie has to reevaluate the importance of truth itself. Although the story raises compelling questions about honesty and friendship, Gordie's epiphanies lack power, often falling flat: when Gordie finally appreciates the loyalty and support of his mother and his former girlfriend, he says, ""It dawned on me that my mother and Thea were good, that they had wanted to see me on my birthday."" Lucidly demonstrating the widening gulf between Gordie and those who love him, Shreve then offers disappointingly little to bridge it, particularly since the lies and betrayals exposed are devastating, though the ultimate surprise, the lynchpin of the plot, lacks credibility. Yet unexpected twists, the deft buildup of suspense and a clever premise sustain the momentum. Agent, Joe Regal. Author tour. (June)
close
Details