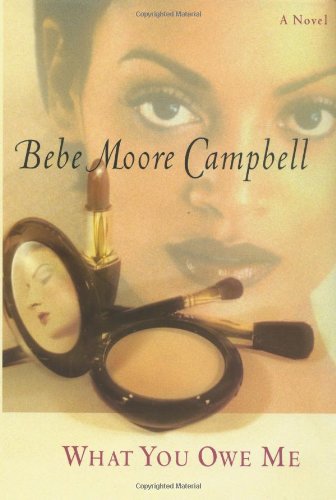 WHAT YOU OWE ME

The friendship between a black woman and a new immigrant in 1940s California sets in motion events that span two generations in Campbell's () densely plotted new novel. Hosanna Clark, a maid at an elegant Los Angeles hotel, befriends her new white co-worker Gilda Rosenstein, a Holocaust survivor whose family had owned a cosmetics factory. When Hosanna tries a special lotion Gilda has made, she persuades Gilda to produce it for Hosanna to sell to local black women. They are very successful, and at Gilda's suggestion they open a joint bank account. Not long after, Gilda and her new husband disappear with all their profits. Daughter Matriece, a witness to Hosanna's struggle to survive on her own, resolves to achieve the success her mother never had; she eventually becomes a division president in Gilda's cosmetics empire. Ignorant of Matriece's identity, Gilda mentors the young woman, with whom she feels an unexplained bond. Gilda's reaction, when she finally learns the truth, is unexpected, and she startles everyone with a surprising proposal that brings the story to a neat conclusion. Numerous subplots crowd the novel, covering issues from reparations and education to romance and betrayal. Campbell's detailed treatment of each accounts for the book's length, but all are credibly tied to the central tale. Character portraits are sometimes shallow, and the story's length tests the reader's stamina, but those with the patience to follow its intricate, entwined relationships will find the novel rewarding.