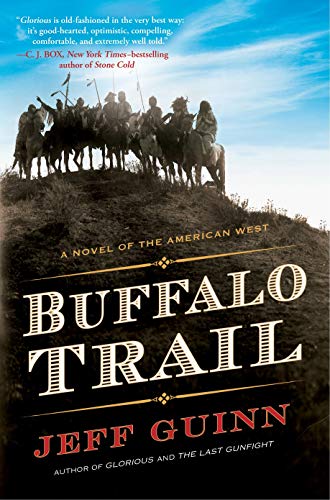 Having written nonfiction accounts of such real-life criminals as the Clanton family, Bonnie and Clyde, and Charles Manson, Guinn’s second work of fiction is a sequel to his 19th-century historical western novel, Glorious. The story continues the adventures of Cash McLendon, who is now, in 1873, on the run from his past and hunting buffalo with a 20-year-old Bat Masterson. They wind up in Dodge City, Kans., where Bat gets them a gig with Billy Dixon hunting south into Indian Territory at Adobe Walls, which has already been the site of a battle involving Kit Carson. The war chief, Quanah, and visionary tribal mystic, Isatai, are raising a coalition of Comanche, Kiowa, and Cheyenne Dog Soldiers to drive the hide men, as they are called, from their land. After he receives word that the love of his life, Gabrielle Tirrito, is in Mountain View in the Arizona Territory, Cash has even greater motivation for making money by selling buffalo hides. But in order to do so, he will first have to survive the Second Battle of Adobe Walls. As western heroes go, Cash is forgettable, neither hero nor villain nor anything interestingly in between. Instead, he is overshadowed by historical cameos in a novel that is too leisurely paced and too stylistically slick to be worthy of comparable titles such as Larry McMurtry’s Lonesome Dove and Mary Doria Russell’s Epitaph. (Oct.)
close
Details