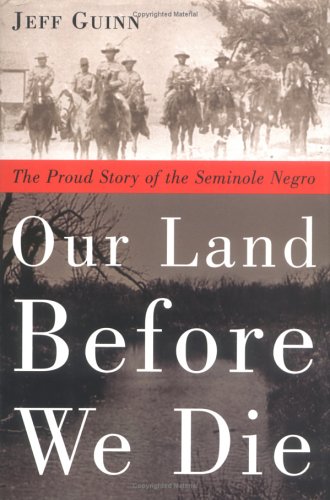 OUR LAND BEFORE WE DIE: The Proud Story of the Seminole Negro

Working with two tellers of the tribal history, Miss Charles Emily Wilson and Willie Warrior, Texas journalist Guinn interviewed more than two dozen people to produce a compelling narrative of the Seminole Negro (pronounced "Nay-gro") tribe's origins and history. In the 18th century, escaped African slaves fled south into Spanish-held Florida and allied themselves with the Seminole Indians, in effect making themselves into a separate tribe. When the Americans under Andrew Jackson invaded Florida, the Negro Seminoles fought side by side with Indian allies to defend villages and land. After the bloodletting of the Seminole Wars of the early 19th century, the Seminole Negroes were removed from Florida and settled in the Indian Territory of what is now Oklahoma. Miserable and alone, most of the tribe walked off the reservation and migrated to Mexico. After the American Civil War, the U.S. government needed troops to help defend the Texas border against Comanches and Apaches, and the group returned and enlisted as scouts to help "pacify" Texas. Four Seminoles earned Medals of Honor for their brave deeds, and the tribe was promised a land of its own. Instead, the Seminoles Negro tribe was disbanded in 1914, and its families were evicted from government-owned land. To this day, their descendants still cry for justice and for a land to call their own. The tribe gathers yearly in Brackettville, Tex., to tell stories to their young people, maintain a cemetery and keep alive their heritage. Guinn depicts all of this clearly and without sentiment, and includes his own involvement with the tribe as part of the narrative, making this an authoritative story of the pursuit of truth.