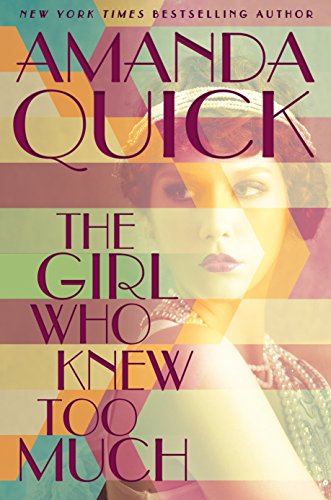 The Girl Who Knew Too Much

Quick’s ambitious novel, set during the golden age of Hollywood, sparkles with wit and clever plotting. Irene Glasson’s boss warned her to leave town, and then was murdered. She drove the length of Route 66 to reach Hollywood because it seemed like the ideal place to recreate herself and start a new life. Now working as a reporter for a celebrity rag, she’s at the Burning Cove Hotel to get a hot scoop on actor Nick Tremayne. But when she finds her source at the bottom of the pool, she doubts the woman’s death was an accident. Hotel owner Oliver Ward is forced to agree with her, particularly once they start to explore why this woman may have been silenced. Oliver was once a famous stage magician, and he’s deft at sleight of hand and misdirection. He can sense that Irene is hiding something from him, but she’s too smart to give away her secrets indiscriminately. Quick (Jayne Ann Krentz, who also writes as Jayne Castle) transports readers back to the 1930s, showing the grimy truth behind Hollywood’s glamorous facades and proving that she is a titan of historical romantic thrillers. Agent: Steve Axelrod, the Axelrod Agency.. (May)