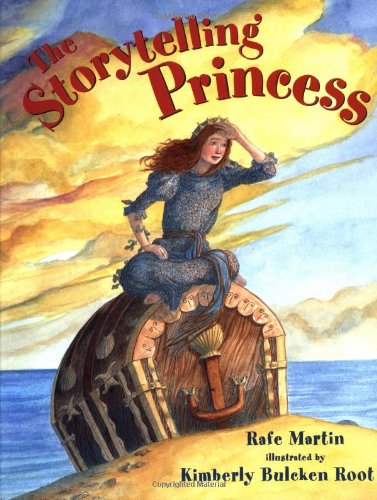 A spirited princess rebels against an arranged marriage to a prince across the sea in this satisfying tale. "I will never, never, marry any prince but the prince I choose for myself," she says. "I'd rather be washed overboard in a storm at sea"—and when her parents accompany her on a ship to wed, that's just what happens: She's cast ashore in a strange kingdom. Dressed in the sailor clothes she finds in a trunk, she learns that a prize is being offered to the storyteller who can tell the prince a story whose ending he has never heard. The disguised princess uses the tale of her ocean adventure to capture the prize, reveal her identity and win his heart (of course, it turns out that he was her intended all along). Martin's () story-within-a-story device works like an old campfire tale, and even though readers may guess the ending, they'll want to see how the royals get there. Root's () finely worked, lapis-and-gold watercolors recall illuminated manuscripts, commenting on the literate protagonists as well as their Old World setting. Readers will likely cotton to this princess, who stands up to authority and tells great stories to boot—and no mention is made anywhere of her beauty. Ages 5-up.