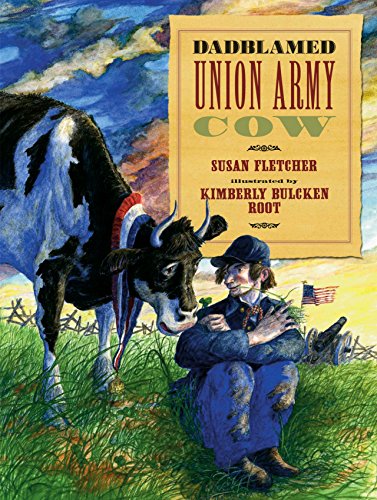 Inspired by the true story of a “celebrated cow” that traveled with the Fifty-Ninth Regiment of Indiana Volunteers during the Civil War (a sprightly endnote supplies the details), Fletcher ( ) and Root ( ) weave first-class fiction. In their version, the cow belongs to a rank-and-file soldier who thinks he’s left the farm behind. But “that dadblamed cow” just can’t say goodbye. She follows him right onto the train and charms his captain (those big, sad cow eyes are mighty irresistible). And “When the bullets went whistlin’ past our ears, she got spooked and bolted—around a clump of cannon, through a bramble patch, over a hill, and right smack-dab into a pack of horse dragoons,” says the narrator. “ 'You’re a dadblamed cow,’ I said.” But if the soldier never stops calling her “dadblamed” he soon values her company: she offers warmth, milk and a reminder of home when the going gets rough. Root’s pencil and watercolor drawings vividly render the Civil War landscape, from the bedraggled encampments to the pitch of a battle. She doesn’t anthropomorphize her bovine heroine, and yet there’s something special about the unnamed cow—she seems as much called to help the soldiers as Clara Barton herself. A terrific read-aloud, and a marvelous approach to history. Ages 5-7.