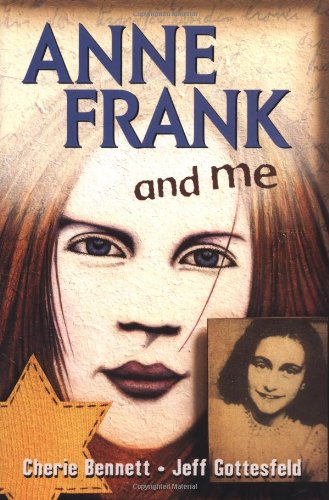 ANNE FRANK AND ME

Adapted from husband and wife Bennett and Gottesfeld's (previously teamed for ) stage drama of the same name, this time-travel view of the Holocaust is long on gimmickry and short on history. Nicole Burns is a self-absorbed teenager only too quick to believe what she reads on the Internet about Anne Frank's being a forgery. When her class visits an exhibit about Anne Frank, the students are assigned the identities of Jewish teenagers during the Holocaust, to make the experience more vivid. Shots ring out and "a sudden pain pierced Nicole, red-hot"; Nicole regains consciousness to find herself in wartime France, living out the destiny of the teen whose name she was given at the museum. Bennett and Gottesfeld acknowledge their debt to Jane Yolen's (Nicole's class is supposed to watch the TV adaptation of the work, which also involves an unappreciative teen's journey back through time into the Holocaust), but this treatment doesn't measure up. The time-travel mechanism is inconsistent and incompletely developed, and the writing is flimsy. Ironically, given the attention it pays to the authenticity of Anne Frank's diary, this story includes a pivotal encounter with Anne Frank that blithely contradicts what is known of Frank's life following her family's arrest; here, on a train to Auschwitz, she is cheerful and stalwart in her faith in God. For the increasing number of young readers familiar with this period of Frank's life, this authorial liberty may cast doubt on the accuracy of other parts of the story. Ages 12-up.